History books will tell you the following…

In 1942 a young man named Fred Korematsu refused to be forcibly removed from the West Coast to incarceration camps with 120,000 other Japanese Americans. He was arrested and convicted of defying the presidential order, but appealed his case all the way to the U.S. Supreme Court. Ultimately, the conviction was upheld and validated the denial of constitutional rights of Japanese Americans for “military necessity.” In 1983, Fred’s case was re-opened and his conviction was overturned.  Fred continued to advocate for justice and civil liberties for all for the reminder of his life.

For the whole story, visit the National Museum!  On to our program.

Last year, January 30th officially became Fred Korematsu Day, the first day in US history named after an Asian American.  We had an event last year in commemoration and decided to program a little something on December 16th in preparation for 2012.

We were so happy to have with us Karen Korematsu, Fred’s daughter and founder of the Fred T. Korematsu Institute as well as students from Rancho Dominguez High, Duarte High and Mendez Learning Center.

We had a great group of kids who were thoughtful, courteous, critical thinkers and conscientious.  And not to mention the great teachers that ensured they were all of the above.

We were able to preview some of the great educational material coming out of the Fred T. Korematsu Institute as well as hear from Karen herself.  After the students were able to create a dialogue with their classmates, ask questions and create posters to bring back to their respective schools.

Aw, it’s like dear old dad is smiling down on his daughter.

They also had guided visits from our stellar docents. 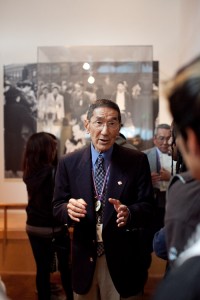 Look out for a recording of the event courtesy of LACOE coming soon!

Look at our volunteer Bill as a young boy!  Top right.  Don’t you want to know where he is, what he’s thinking, how he got his hair so perfectly coiffed?

Ok but seriously.  Our volunteers have a rich narrative of history to share with younger generations.  History has been written from the top down, but the foundation is the strength of the story and ordinary peoples’ voices need to be heard.  A new history told from the bottom up needs to be cultivated bringing dimension and diversity to our understanding.  This year we are introducing a new Speakers Bureau through online interfacing.  The Digital Speaker’s Bureau will facilitate this new history and discourse between generations.  Enabling students to speak to older adults and hear their stories is a much more moving experience than one that can be gained from a textbook.  The Speaker’s Bureau also allows us to reach an audience that for distance or financial reasons is unable to visit the National Museum.

Students can have a richer education that includes more of the diversity that makes America.  The personal connections that can be made through the Digital Speaker’s Bureau are difficult to replicate in a textbook or classroom.  The shared experiences of the volunteers will lend itself to an informed society and one more aware of the complex networks of narratives that make our history.

Plus, look at how cute Bill looks.

We trialed an oral history interview over Skype last spring between Bill and a high school in Texas.  It went a little something like this.

If you’re interested in setting up a group for Digital Speaker session, please email groupvisits@janm.org!

Visit our other sites